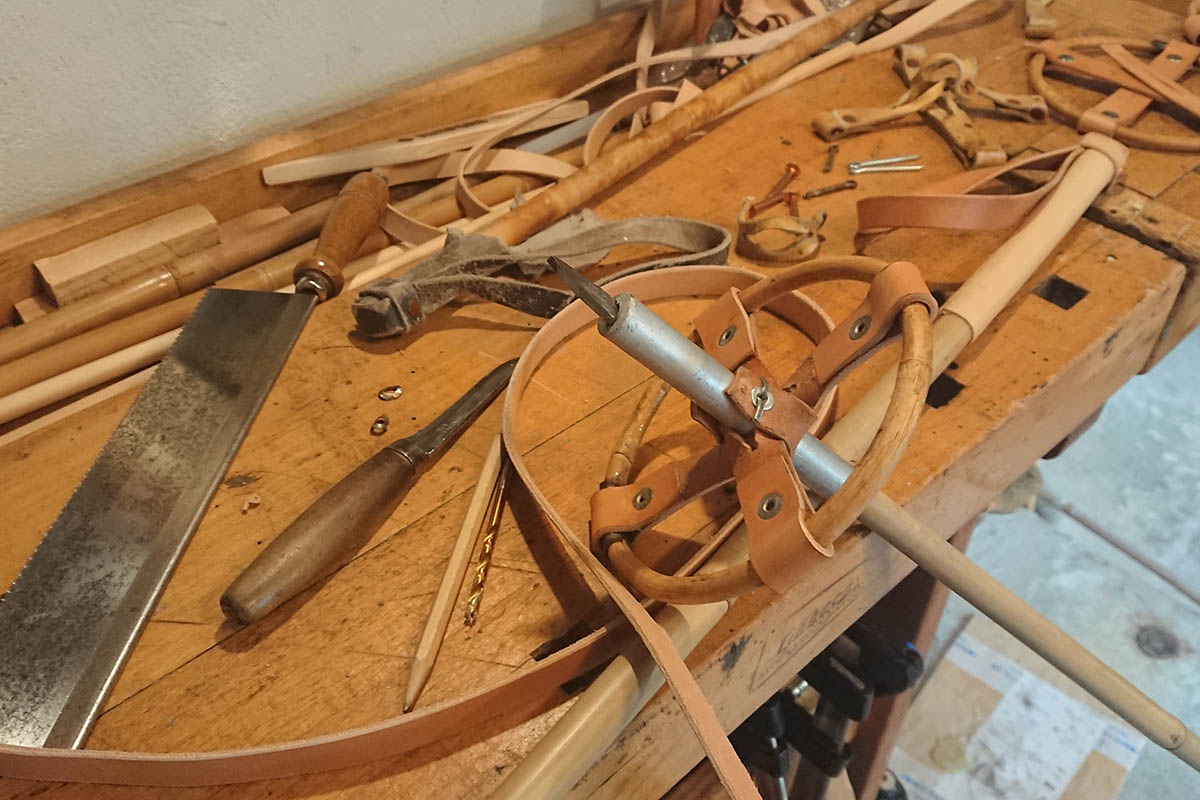 C like in century. Next year will be a hundred years since the polar explorer Fridtjof Nansen was awarded the Nobel Peace Prize for his humanitarian and peace-building efforts within the League of Nations, the forerunner of the UN. In the same year, 1922, Randfabriken Cimbria Inc of Simrishamn launched my great-grandfather’s first ski binding: Lieutenant Rimfors’ model. He was one of the millions who, since childhood, had been inspired by Nansen’s captivating expeditions on skis across Greenland and towards the North Pole. Although the Norwegian polar hero was awarded for helping stateless refugees obtain their “Nansen Passports” after the First World War, his biggest legacy is, of course, that recreational skiing spread across the world. Suddenly, skiing was no longer just a means of transport for Norwegians, Sami and settlers in the northernmost Nordic countries.

1922 was also the year when editor-in-chief Anders Pers of the newspaper Vestmanlands Läns Tidning asked: “Why can we not take up Mora–Sälen as a national ski race, take it up right now, as we best celebrate the 400th anniversary of Gustaf Eriksson’s liberation endeavors.” The day after this article appeared in VLT, my great-grandfather’s igloo buddy, Mr Jones,* picked up the idea in the national paper Dagens Nyheter: “What does the Swedish Ski Association say? Here are opportunities to institute a classic race!” After that, the media fell silent. Then, three weeks later, Mr Jones received a paper clipping from Mora Tidning announcing that IFK Mora had declared itself ready to “take on the race if only a sum of one thousand Swedish kronor could be raised to cover the costs.”

As chief editor for the sport pages at DN—where, two years earlier he had revolutionized sports journalism with the first daily collected sports page in the Swedish press—David “Mr Jones” Jonason promised the following day to donate the thousand kroner to the Mora sports club in order to carry out the competition. The media awoke and got cracking. Within two weeks, “Sweden’s real marathon run, Sweden’s Holmenkollen race, a classic and historical competition, the Swedish people’s contest” was organized. The rest is history.

Next year, an entire century will have passed since the very first Vasaloppet race, or “Gustaf Vasaloppet”, as Mr Jones and several others called it. However, as you all know, the route was from Sälen to Mora instead. It has also been half a millennium (plus one year in February) since the head of state at the time, Gustav Eriksson, later King Gustav Vasa, traveled through the Dala forests in order to recruit the Dalecarlians to help him in the rebellion against the Danish king, so that Sweden could leave the Scandinavian Kalmar Union.

Ski bindings were not the only thing my great-grandfather developed for skiing. He rationalized the ski waxing methodology by creating a coherent system with his innovative waxing chart, developed ski waxes for all snow conditions, expedition pulks for long ski tours, slalom skis, and of course, bamboo ski poles. The Rimfors poles from the 1930s are one of the reasons I started making ski poles myself. Since there are not many who make ski poles with bamboo anymore, many of the contestants for the anniversary heritage Vasaloppet race, called Jubileumsvasan, have contacted me to help them with the construction of traditional 1920s style ski poles. Amongst them are two of my friends who will cross country ski the ninety kilometers between Sälen and Mora using vintage tar-waxed wooden skis and long poles with heavy leather baskets. Therefore, I have renovated two pairs of old bamboo poles for them.

I myself have made the mistake of going on a week-long expedition in the mountains in the old style without replacing certain materials and components of the aged equipment. During an igloo expedition through the Marsfjällen mountains, first one of my pole straps broke, unfortunately during the ascent from Marsliden, then one of the leather baskets also came off, and eventually the leather grips deteriorated under my drenched woolen mittens. It was with a lot of effort and great difficulty that I progressed with my igloo pals to the final night and welcoming committee in Kittelfjäll.

Very old skis and poles should not be taken out on long journeys without checking them thoroughly. Wood contains lignin. It is the lignin that makes wood hard and resilient. Over time, the lignin breaks down and the wood dries out and becomes fragile. Raw linseed oil can rejuvenate wood by replacing lignin, and can be applied—mixed with an equal amount of balsam turpentine—to soak in and give new strength. For my own part, I would still never head out for a long journey into the wilderness with a pair of hundred years old skis or bamboo poles. It is impossible to know whether the weakened wood or leather will hold up or not.

Traditional old bamboo ski poles are relatively plentiful. But if you have to push yourself ninety kilometers between Sälen and Mora, I strongly recommend renovating the poles first. Here is a guide of how to renovate a pair of vintage ski poles yourself.

With the help of this do-it-yourself description and attached pictures, I hope that anyone who desire can renovate a couple of old ski poles so that they become functional as new again. If your old bamboo poles are long enough, you don’t really need to replace the bamboo canes. There are often cracks on old bamboo, caused by temperature change or dry storing conditions, but it is with these as with the oak beams in the ceiling: a longitudinal crack is usually nothing to worry about.

The saddler and upholsterer Bodil, who picked and cut out leather for the poles I renovated for my friends, sells ready-made kits with cut-out leather of the right dimensions. You get the adequate thickness and quality of the different pieces of leather. She needs to know the diameter of your rattan rings and exactly how long the grips should be.

Tonkin bamboo (Pseudosasa amabilis) became the dominating ski pole shaft from the 1920s and onwards. Other varieties of bamboo were still used, but were soon totally replaced by Tonkin. You find Tonkin canes in pretty much in all garden and hardware stores. Bring the ferrules with you for reference when you shop for bamboo. Around Ø17 mm at the upper end by the grip and around Ø15 mm at the lower end by the basket usually work well. Pick bamboo canes with thick cell walls. It’s a little heavier but more durable.

Flat head copper rivets of the right dimension were difficult to obtain. I bought a 10-pack with 4×32 mm. They were almost too short, but I eventually managed to knock on the washer and secure the strap. To avoid buying hundreds of copper rivets, I bought from Hockeyverkstan.

Equipment in the good ol’ days

I will not be long-winded and go into old equipment too much. But I have some general tips that can be useful for those lucky ones going to ski the Jubileumsvasan. My first tip is: be consistent! Don’t dress like a rapper below and a rocker on your upper body. Stick to the socio-economic class you intend to represent in the race. Otherwise, it can be comical. In other words: tweed knickers paired with a worn-out lumberjack shirt may not be the best combination. Just because both occurred among skiers in the 1920s does not mean that a skier combined these two garments. Be strict!

So, what were they wearing back then? Many of you probably know this already, but for those of you who want to immerse yourselves, I recommend looking in old handbooks and Skidfrämjandet’s (current Friluftsfrämjandet) yearbooks on skis. There you find both reviews and advertisements that tell how they reasoned about equipment and which models existed.

PRV’s (Swedish Intellectual Property Office) searchable patent database is also a very good source to see whether the equipment you are thinking of existed or not in 1922. There are, for example, plenty of ski bindings (formerly often called “skidbindsle” in Swedsih) with both toe iron and tightener from the late 19th century until 1920s. Under “advanced search” you can search from 1922 and back in time.

I have one chapter each from two historically important handbooks. The first is a one-page chapter only, dated 1922, from the book Första handledning vid utbildning i skidlöpning (First guide to ski training) by the ski promoter Victor von Feilitzen. The second is admittedly from 1931, but most of it is perfectly in line with how it was in 1922. The book is called Handbok i skidlöpning (Handbook to skiing), written by my great-grandfather and his partner Gunnar Dyhlén. The chapter on equipment is a full 28 pages and deals with everything from how the wooden log should be cut up to make skis to what clothes to wear for competition.

I’m happy that old vintage equipment and natural materials get highlighted thanks to Jubileumsvasan. Natural materials are often superior to many modern materials. In addition, natural materials often work well in a circular and climate-smart economy. Personally, I hope that the Jubileumsvasan will be a permanent feature in the Vasaloppet program. Who wouldn’t want to ski the “Original vasa” and feel the echoes of history?

Go for it and good luck!
Fabian

P.S. If you’re interested in building a pair of modern touring or alpine ski poles, you find a DIY guide here!