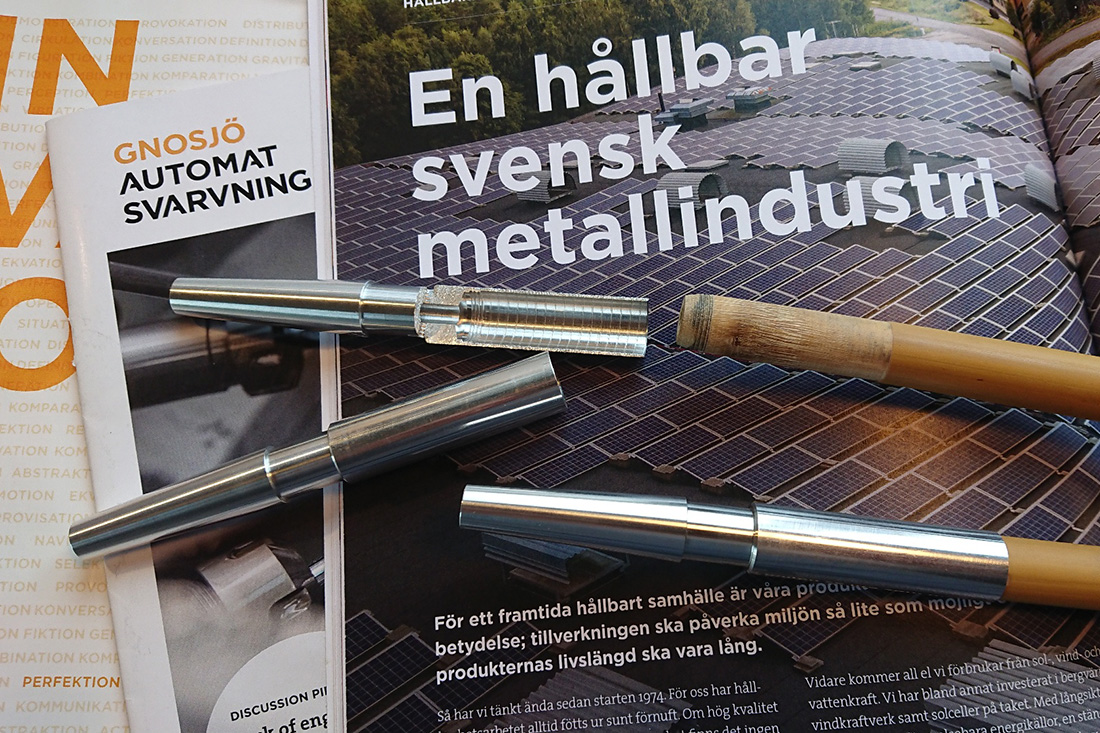 As we were skiing in Borgafjäll last winter, suddenly my friend lost his basket. It was the ski pole ferrule that came loose when he left the piste for the Laponian powder and the basket got caught in something deep down below. The reason it came off was probably due in part to the fact that the hot melt glue I had used hade become too stiff and fragile in cold temperature conditions. After that, I switched to a softer and more flexible hot melt adhesive, and I also secured some ferrules with pop rivets (see below).

Pop rivets work but they are not optimal for a skier who may need to replace or shorten the bamboo cane. The ultimate solution would be a ferrule with an internal thread to screw the bamboo into, like a bolt into a nut. This idea had actually struck me even before I had my first ski pole ferrules made. An internal thread in the bottom of the ferrule coupling would ensure that no ferrules—with tips and baskets—could ever come loose. . Until recently, I had thought such threads were impossible to accomplish in a lathe.

This spring I talked to Gnosjö Automatsvarvning, the precision turning company that had helped me with my first self-designed aluminum ferrules the previous year. And yes, that idea could probably be realized, they replied. Said and done. I sent a sketch of how I imagined the internal thread would work. The production manager for the numerically controlled lathes confirmed that “we can fix this”, and my order was placed in the queue.

Time to turn some ferrules—from idea to reality

Today it was finally time. On site in Gnosjö, together with the CNC production engineer on the Swiss type turning 38, I tested exactly whereabouts on the inside of the ferrule that the threads would bite the best. The engineer had split a prototype ferrule so that we could see from the “inside” what the threads looked like. We moved them upwards three millimeters, but then realized that it became too hard to mount (screw) the bamboo canes which I had prepared. We needed a pair of tongue-and-groove pliers to loosen the ferrule.

We then proceeded to move the threads back down a little for the next prototype, and eventually everything was perfect. I screwed and tightened the ferrule on by hand, and was satisfied that it was solidly joined and that I could unscrew without pliers. We then progressed to mounting it back on again, and tested the coupling by pulling from either end … happily confirming that the ferrule just wouldn’t budge. There was now no risk that it could come loose, even in the thickest brushwood off-piste forest.

Climate-smart and sustainable all the way

Soul-happy and floating on air, I drove home to Österlen. Not only happy that the newly upgraded ferrule performed better than I could have imagined, but also for having confirmed what a fantastic company I have had the honor of collaborating with, or rather been rescued by. I was deeply impressed by Gnosjö Automatsvarvning, not only by their competence and quality, but also by their environmental and sustainability actions. Solar panels on the roof, their own wind power generator, cutting oil from the lathes as underfloor heating, vegetable oils instead of mineral oils, efficient recycling, and more. As much as 97 percent is self-produced renewable energy. Quite simply, a role model for all industry. No wonder that they won the Climate Prize 2020 for Jönköping County.

Easy to assemble and easy to disassemble—screw and unscrew

Ski poles should be easy to repair. If my friend had never lost that ferrule in Borgafjäll, I might never have proceeded with my thoughts about internal threads to secure the ferrules. Belts and suspenders—glue and threads. The threads prevent the ferrule from coming loose in the event of a surprising jerk, and the glue locks the ferrule into the threads. It is not only important that it stays put—the ferrules should also be quick and easy to assemble—and also to disassemble if necessary. If you need to replace or shorten your bamboo cane, you simply dip the tip in hot water, melting the hot melt glue, and unscrew. Ideal for reuse, recycling and a circular economy.

Patents are expensive and protectionism does not solve the climate crisis. We can only solve it together! So, by publishing my idea, I eliminate the possibility of patenting it. Thus, no one else can patent this invention, and then no one else can stop a pole maker from copying or using this idea, including me and my bamboo ski pole colleagues. The more the merrier! I did not order the ferrules alone. I did it together with Bart at Kustomaid in the Netherlands, Andre at Bumbear in Bulgaria, Jocke and Pancho in Borgafjäll, and Richard at Laughing Stocks in Australia.

So, now my friends and I in the “bamboo brotherhood” can build our ski poles without having to worry about someone throwing a spanner into the works. The more bamboo poles on the slopes instead of aluminum or carbon fiber poles, the better for the environment and the climate.

Previous post on ski pole ferrules: The ferrules – the Achilles’ heel between bamboo, basket and the tip