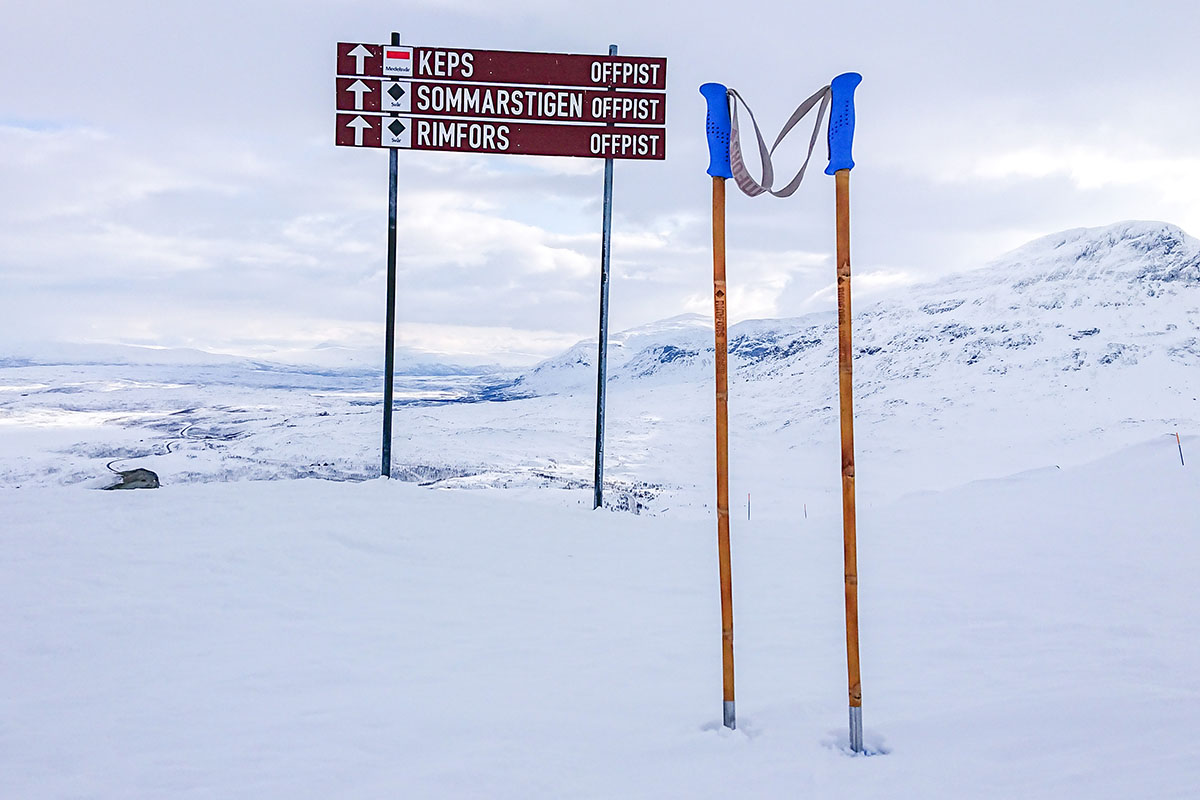 Suddenly I step on my own pole, with full boot power right above the basket. The bamboo cracks! Shit happens, I think but keep calm. My daughter was kind enough to carry my poles to the lift while I carried her skis, which I had just laid on the snow to continue walking, as she threw my poles in front of me. The poles land perpendicular on top of her skis, straight ahead of me, in my direction of walking. But I notice too late, and the crack is a fact.

Five minutes later, the pole is fixed and functional as new again. My first cracked bamboo ski pole is soon just a memory of the past. If bamboo cracks, it does so along the fibers, and never breaks off completely. A few turns of tape do the trick and the rest of the week I don’t even think about the crack anymore. It is simply not noticeable. And when I get home from Borgafjäll, I easily replace the Tonkin cane with a new one.

Different bamboo types were used for ski poles as early as the 19th century, but from the 1920s and for decades after that, Tonkin bamboo (Pseudosasa amabilis) dominated. Tonkin has thicker cell walls and is stronger than other bamboo varieties of the same size and weight, while the nodes are barely noticeable. Tonkin got its western name from the bay in the South China Sea, where it was shipped from.

But as noted, there are more types of bamboo. In India, another variety grows with shorter internodal spacing. Its scientific name is Dendrocalamus strictus, but it is often called Calcutta bamboo, or iron bamboo for its incredible strength and durability. The most distinctive feature is that it is solid, like wood, even though bamboo is a grass. Calcutta bamboo thus weighs a little more, about 20–25 percent more than Tonkin bamboo, when I have compared.

That my ski pole broke was probably a bit of bad luck. We have subjected the family’s bamboo poles to tougher trials than being run over by my boot. Anyhow, it still cracked after all. But that would not have happened if it had been built with Calcutta bamboo. Nor would it have been bent like aluminum poles.

My first ski poles of Calcutta bamboo – the “iron bamboo”

Since late summer last year, I have been in contact with a company in Calcutta that sells Dendrocalamus strictus to other ski pole manufacturers. A few months ago, I received three canes to test and study more closely. My expectations were met. Calcutta bamboo is incredibly strong and durable. However, the canes were too short for anything else than kids’ poles. But since my kids have grown a lot over the last year and a half, it is time to update their poles to their current heights.

To solve things as simply as possible, my seven-year-old gets the nine-year-old’s poles, while the eleven-year-old can still keep his for the rest of the season. However, we noticed that he has grown out of his ski pants and jacket. And since they all get to choose the colors (except for the seven-year-old whose kids’ grip is only available in black), we move around the grips, straps and baskets until everyone is happy. The eleven-year-old is extra satisfied as he has matched his “new” old poles with his new outfit. My nine-year-old daughter thus needs new ski pole material and gets the best deal. The length of the Calcutta canes matches her height, and a new era in my workshop has begun, I hope.

Together with my bamboo brothers in Borgafjäll and Bulgaria, we have now ordered a lot of this heavy duty Calcutta cane. The bamboo is currently being harvested outside Calcutta. Then it will be dried, sorted, straightened, etc., and sometime this fall, the delivery will arrive by boat to the port of Helsingborg, southern Sweden.

The idea is that, you as a customer, should be able to choose which kind of bamboo your poles should be made of.

It will also be easier to make ski poles from Calcutta bamboo than from Tonkin. The bamboo sticks from India are very well sorted, the measurements are more precise, and almost 100 percent can be used for ski poles. Sorting Tonkin canes always takes time, some sticks have to be straightened, and on average I have been able to use only about 25 percent of all the Tonkin bamboo I have bought. So, I’m lucky to have a big garden where I can tie plants and make use of the waste.

During Easter we have tested our first pair of Calcutta bambo ski poles in Riksgränsen, and they are great. By fall, you will be able to design your own “iron bamboo ski poles”!